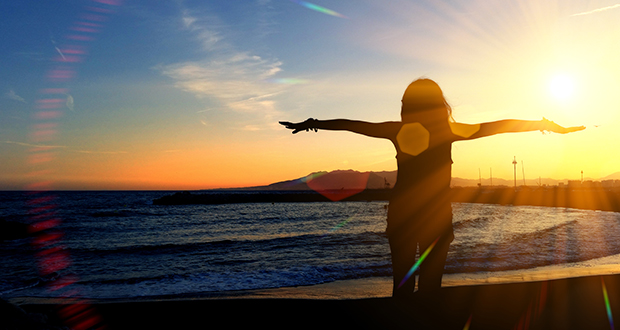 Raise your hand if you think sunlight causes skin cancer. For decades, doctors and the “cancer industry” have warned us to stay out of the “dangerous” sunlight and/or use plenty of sunscreen. But is this good advice?

Did you know Vitamin D deficiency has been linked to cancer, diabetes, osteoporosis, rheumatoid arthritis, inflammatory bowel disease, multiple sclerosis and autism? Vitamin D isn’t really a “true” vitamin, as we don’t need food to attain it. Natural sunlight allows our body to create vitamin D and even destroys excessive amounts. How does that happen? When the sun’s ultraviolet B (“UVB”) rays hit your skin, they trigger a precholesterol molecule (7-dehydrocholesterol), which is then turned into vitamin D3 (aka “cholecalciferol”).

Research studies have shown a direct connection between vitamin D deficiency and heart disease. The authors of a 2006 article in the American Journal of Public Health state, after a review of more than 60 studies on vitamin D and Cancer, that cancer occurrence and death could be reduced with improved levels of vitamin D in the body. The incidence of breast cancer could be reduced by 50% and colon cancer by 80%!

And a June 2007 Creighton University School of Medicine study indicated that appropriate levels of vitamin D3 (and calcium) reduced the risk of cancer by a staggering 77%! A 2009 study by a group of Leeds University researchers actually found that higher levels of vitamin D were linked to improved skin cancer survival odds, while other studies have found that vitamin D has a connection to a strong immune response in the body.

Don’t fall for the “sunscreen myth.” The idea that sunscreen prevents cancer is a myth promoted by a greedy “tag-team” effort between the “cancer industry” and the sunscreen industry. Sunlight is actually good for you (especially the UVB rays), and sunscreens filter out UVB! The main chemical used in sunscreens to filter out UVB is octyl methoxycinnamate (aka “OMC”) which has been shown to kill mouse cells even at low doses. Plus, it was also shown to be particularly toxic when exposed to sunshine. And guess what? OMC is present in 90% of sunscreen brands!

The most popular brands of sunscreens also contain other toxic chemicals (such as dioxybenzone and oxybenzone) that are absorbed through the skin where they enter the bloodstream, generate free radicals, wreak havoc on the immune system, damage the liver and the heart, and even promote systemic cancer. Titanium dioxide, another common ingredient in sunscreens, has been classified as “a potential occupational carcinogen” by the National Institute for Occupational Safety and Health. If you want to use a natural sunscreen, try aloe vera gel. Also, we use Dr. Mercola’s “Natural Sunscreen with Green Tea” for the kiddos if we are going to be out in the sun for prolonged periods of time. 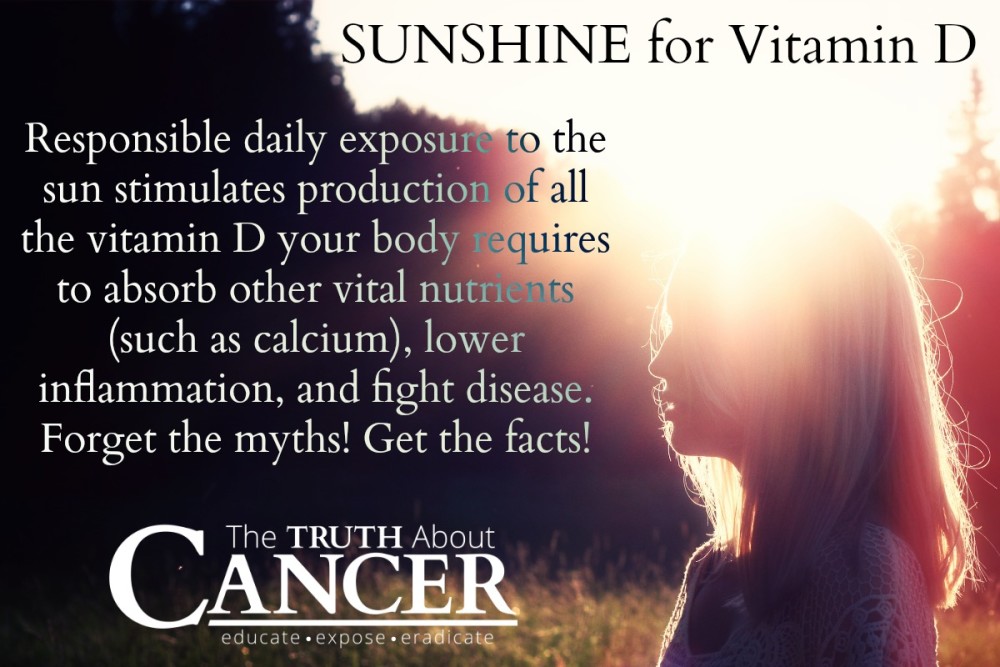 I am *NOT* saying that you should sit out in the sun until you’re red and crisp like a lobster! Burning will damage cellular DNA, which leads to cancer. If you’re pale as a ghost, you probably want to start out with just a few minutes in the sun each day. My wife, Charlene, can sit in the sun for an hour (or more) each day and not get burned. But you need to understand that antioxidants (in fruits and vegetables) and proper nutrition (specifically the B vitamins) will *prevent* sunburn.

Here’s a little trivia: the term “Red Neck” actually originated from the early American colonists (in the South) who would get sunburned necks during the summer. But their “red necks” were not just a result of being in the sun all day. They were a result of a nutritional deficiency. You see, the colonists didn’t understand how to properly process corn like the American Indians did. The Indians processed corn using potash (which is highly alkaline) that makes the B vitamins in corn available for assimilation during digestion. But the American settlers (too arrogant to follow the food preparation ways of the Indian “savages”) would simply grind up their corn and consume it as corn flour (corn meal).

This resulted in vitamin B deficiencies, which (when coupled with too much sun exposure) would result in their “red necks.” By the way, the nutritional deficiency link to sunburn has been supported with multiple studies, including a study published in the 2004 American Journal of Clinical Nutrition.

In light of the fact that the best place to get vitamin D is natural sunlight *AND* the fact that vitamin D deficiency can lead to cancer, diabetes, and numerous other life threatening diseases, the warning to “stay out of the sun” is completely irrational! And despite the importance of vitamin D, it’s estimated that over 50% of the U.S. population is vitamin D deficient. During the summer, my family tries to lie out in the sun for at least 30 minutes, four to five times per week, to obtain sufficient vitamin D to stay healthy and strong.

However, in the fall and winter time, you’ll need a good vitamin D3 supplement. But take note that most vitamin D supplements are virtually worthless. Here’s why: The vitamin D in milk and in most vitamin supplements is vitamin D2 and is synthetic. Vitamin D2 is also called “ergocalciferol.” It is not the form of vitamin D that you need to prevent cancer and degenerative diseases. The form of vitamin D which you need is vitamin D3 (“cholecalciferol”) and, as I mentioned above, it is produced from the UVB rays in sunlight.

Editor’s Note: This article was initially published in April 2015 and has been updated in August 2020.

Do you want VIP access to all the latest cancer-fighting info? Get INSIDER access to experts, knowledge, diet tips, our great community, and more!

Ty Bollinger is a happily married husband, the father of four wonderful children, devoted Christian, best-selling author, medical researcher, talk radio host, health freedom advocate, former competitive bodybuilder and also a certified public accountant. After losing several family members to cancer (including his mother and father), Ty refused to accept the notion that chemotherapy, radiation, and surgery were the most effective treatments available for cancer patients. He began a quest to learn all he possibly could about alternative cancer treatments and the medical industry. Ty has now made it his life mission to share the most remarkable discovery he made on his quest: the vast majority of all diseases (including cancer) can be easily prevented and even cured without drugs or surgery. Ty speaks frequently to health groups, at seminars, expos, conferences, churches, and is a regular guest on multiple radio shows and writes for numerous magazines and websites. Speaking from personal experience and extensive research, Ty has touched the hearts and changed the lives of thousands of people around the world.