Ty Bollinger: Talk about estrogens in food. Soy has what is called phytoestrogens, right?

Dr. Desaulniers: Okay. Food has been around since we’ve been around. Plant estrogens do not act like aggressive estrogens. They are very protective. They protect against DNA damage, they block the estrogen receptor sites. They actually reduce the level of circulating estrogens in the body.

Flax, for example – a study that I like to quote – there was a study done at the University of Toronto where they took women who were getting ready to have surgery, they measured their cancer markers and their tumor levels, and for a month they gave them five teaspoons of ground flax seed in a muffin, which probably was made with white flour and sugar, but, anyway, the ground flax seed was in there.

And in 30 days their markers went down by 30 to 71%, just with ground flax seed. Fermented soy—if you use non-GMO, organic, whole fermented soy, it has a very protective effect. It turns on the p53 suppressor gene, it reduces the circulating estrogens. It is a protective food. Look at the Asian society. They have used soy in their diet for thousands of years and their breast cancer rates are much lower. 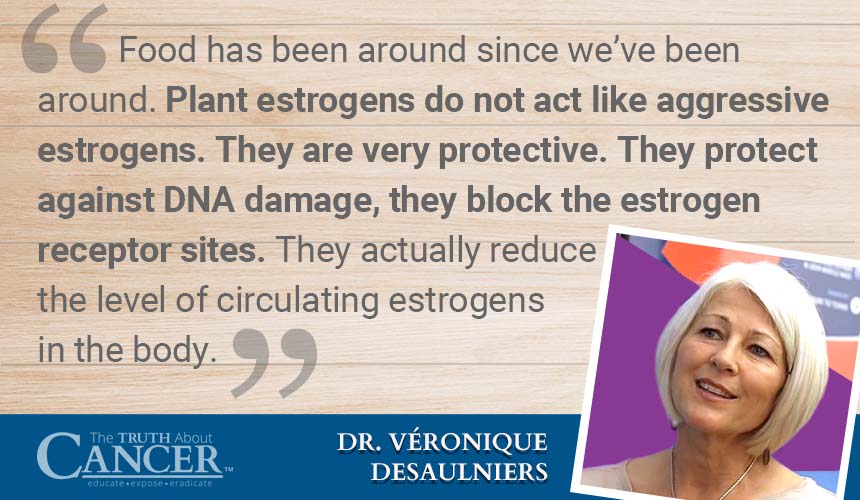 Ty Bollinger: But the keys are that it is non-GMO and fermented.

Ty Bollinger: It is interesting, isn’t it, that we have to say non-GMO. Soy, by nature; corn, by nature; cottonseed, by nature –all of these things that are genetically modified – they are actually not GMO by nature, right?

Ty Bollinger: And so when you genetically modify them, they’re not really any longer that substance anymore.

Ty Bollinger: They’re something else.

Dr. Desaulniers: They’re frankenfoods. They’re foreign foods so your body doesn’t recognize what they are.

Eating right is one of the most powerful ways to prevent, treat, and beat cancer.

Click here for healthy recipes, foods that fight cancer, and much more!

Dr. Veronique Desaulniers, also known as “Dr. V” is a natural health pioneer with over 30 years active practice in Bio-Energetics, Digital Thermography, Meridian Stress Analysis, Homeopathy, and Chiropractic. After she was diagnosed with breast cancer in 2004 and healed herself through natural means, she decided to devote her time to sharing her personal, non-toxic healing journey with others. Her years of experience and extensive research have culminated in the award-winning book "Heal Breast Cancer Naturally" and “The 7 Essentials,™" her coaching program that unravels the mystery of healing the body in 7 easy steps. Her story, wisdom, and knowledge has touched the lives of thousands internationally.