Ty Bollinger: If there are supplements that actually do they’re no longer supplements. They’re somehow drugs.

That message is the antithesis of the natural world. It is the antithesis of natural living and of holistic medicine and holistic healing. We Ty, we are spontaneous self-healing beings. We’re programmed from the day we’re born to heal ourselves if we give our bodies the right nutrients and don’t poison ourselves with dangerous toxins. 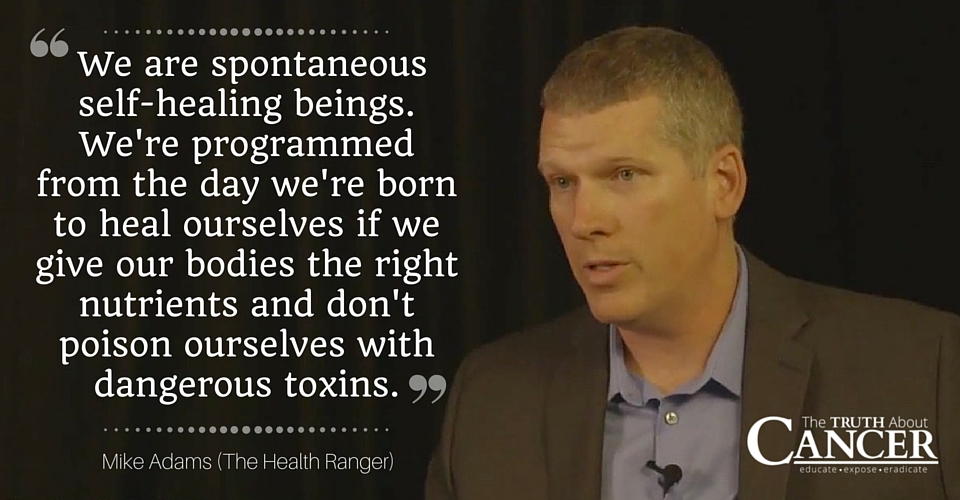 Ty Bollinger: That’s right. I agree completely. What the system of modern medicine is doing now is they’re taking drugs that will compromise that innate system that we have to self heal, and make it to where we can’t self heal. We’re dependent upon more drugs just to… does it keep us alive, or does it keep us sick?

Mike Adams: Yes, as a great example of that, you see in the mainstream media, which is very strongly biased towards Big Pharma interest. You see stories like: “Oh, don’t eat grapefruit because it might interfere with your medication.”

Mike Adams: Right. So, the assumption of that kind of message is that the medication is your nutrition. The grapefruit is a dangerous intervention. How did we get to this situation in society? It’s these natural foods – fruits, vegetables – that should be your first primary medicine. It’s actually the blood-pressure medication that interferes with your normal human metabolism and not the grapefruit.

Ty Bollinger: I mean, how often have I gotten emails from people that have cancer. They will tell me, “I can’t take the super greens that you think I should to be healthy because my doctor says that it will interfere with the chemo.”

Ty Bollinger: I’ll say, “Why? Why will it interfere with the chemo?”

“Because it will stimulate my immune system.”

“Don’t you want your immune system to work because isn’t that your innate system to protect you?”

Mike Adams: One of the great censored truths about chemotherapy and antioxidants is that your body is trying to eliminate toxic chemicals from your body, which is why it’s trying to eliminate the chemotherapy. This is why when you have high levels of glutathione, for example, or you take supplements like NAC (N-acetyl cysteine) it helps to promote glutathione production. Your body becomes more effective at eliminating toxins, so it becomes more effective at eliminating chemotherapy which is a poison.

Ty Bollinger: It is. It is bizarre.

Did you know cancer has natural predators?

Go here to discover how experts are eliminating cancer!

←
Previous
Does America Have the World’s Worst Food Quality & Safety?
→
Next
How Emotional Trauma Can Create Cancer… and 4 Ways to Stop it

Mike Adams (aka the "Health Ranger") is an outspoken consumer health advocate, award-winning investigative journalist, internet activist and science lab director. He is the founder and editor of NaturalNews, the internet’s most trafficked natural health news website. He is also the creator of CounterThink.com, FoodInvestigations.com, HealingFoodReference.com, HonestFoodGuide.org and several other websites covering natural health topics. Mike has been called “the best health and natural products writer on the scene today."