So what is in celery that, in the studies, have shown to fight cancer? It’s apigenin, one of those phytonutrients, powerful phytonutrients that fight cancer and it suppresses, prevents, reverses cancer, it inhibits angiogenesis. Let’s go back for a moment in memory to that slide where you saw the blood vessels, the gravy train, right? Gravy train out to the tumor. And apigenin comes along and starts going like this, cutting off the blood supply, the oxygen, the nutrients to those tumors. Very powerful. I know of one study with rats and mice and breast cancer, and they found celery juice was curing breast cancer in mice. So that’s very exciting. I’m familiar with a study that’s going on right now, it’s not published, it’s current, with women and breast cancer looking at what’s going to happen with celery juice and breast cancer. So I would encourage, and it isn’t just for breast cancer, anyone with cancer, to start juicing celery every single day. 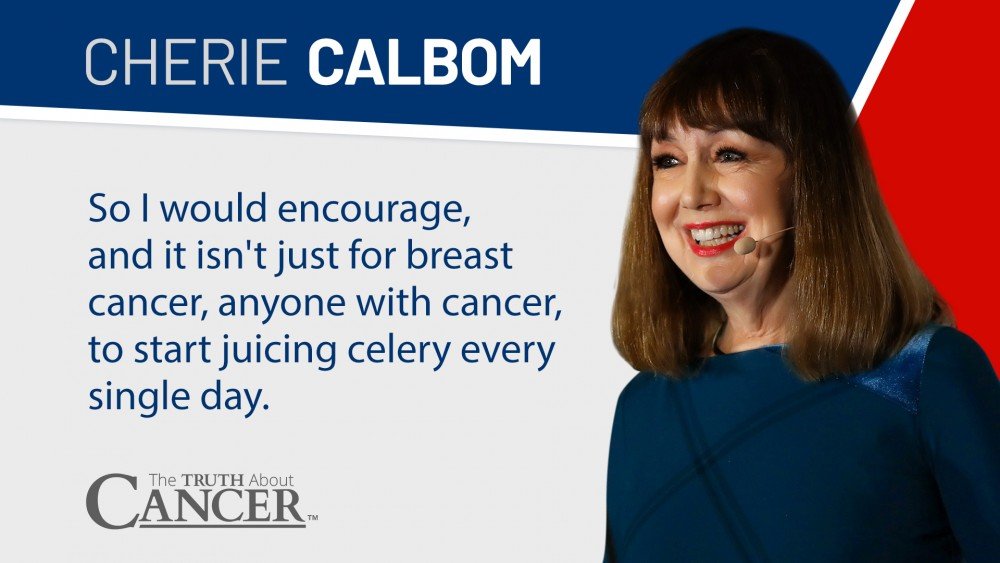 Carrot juice, loaded with polyacetylenes. That’s another one of those phytonutrients that inhibit cancer cells. Studies show they reduce cancer in mice and rats by a third. So if carrot is too much sugar for you, and some people it is. Some people can drink glasses of carrot juice, and they’re just fine and other people say whoa, I’m feeling a little dizzy, a little light-headed, the room sort of—I’ve had people go through all sorts of things. Then you want to reduce your carrots if it’s too much sugar and just combine maybe one or two with a lot of green juices. We’re all different, we’re all so unique, we have to listen to our bodies and take good care as we listen as to what they’re saying to us.

So celery, bell peppers, and citrus. And when I talk about citrus, lemon and lime are the best. Oranges are very high in sugar. Lots of people can’t do grapefruit, some people can. But celery, peppers, and lemons and limes suppress BEGF, and that is one of those signaling factors to create those blood vessels going out to tumors.

Watercress, I love watercress. There are so many studies on watercress it’s wonderful. Watercress has been shown to help you lose weight, that’s just a little aside. But there are studies on watercress and cancer all over the place. Watercress really does help fight cancer. It blocks those blood vessel formations to tumors. Again, you saw those blood vessels going out to the tumors. It turns off a protein called HIF. And there are a variety of these stimulating factors that these different vegetables turn off so that those blood vessels aren’t formed. Or if they’re formed help to cut them like what happened for me.

Fisetin in strawberries, cucumbers, apples, and onions shrink those blood vessel formations to tumors. I could just go on and on, and when I put this list together of the best juices, really everything is the best juice unless it’s too sweet a fruit. You don’t want fruit sugar. You want to keep your sugars very low, but you want lots and lots of these life-giving, healing vegetables. Garlic is another one that’s excellent.

Discover little-known natural therapies, treatments, and protocols to heal and prevent cancer from 40 of the world’s leading cancer experts.

Go here to find out more.

About Cherie Calbom "The Juice Lady"

Cherie Calbom, known as The Juice Lady, TV chef, and celebrity nutritionist, has helped in pioneering the fresh juice movement around the world. A graduate of Bastyr University with a Master of Science degree in whole foods nutrition, Cherie is author of 33 books including her latest "The Juice Lady’s Guide to Fasting" and "The Sugar Knockout," "The Anti-Inflammation Diet," "The Juice Lady’s Big Book of Juices and Green Smoothies" (in English and Spanish), "The Juice Lady’s Turbo Diet," "Juicing, Fasting, and Detoxing for Life," "The Juice Lady’s Living Foods Revolution," "The Complete Cancer Cleanse," and "Juicing for Life" (in Spanish and English).